BREAKING
Scott Kaspar has stepped down to pursue an urgent and important opportunity and we are excited for Mr. Kaspar's new endeavor.
We are excited to announce that Ray Robbins will be assuming the role of Chairman immediately!

I am incredibly proud of the Election Judge Workshop for Chicagoland Police we conducted on November 20th at Trump International Hotel & Tower Chicago. Alongside other coalition partners, including the Freedom Initiative NOW, we put on a fantastic program for law enforcement, with over 200 in attendance. Featuring keynote speaker Bernard Kerik, 40th Police Commissioner of the City of New York, Master of Ceremonies Gary Franchi of the Next News Network, and presenters including AM560 Hosts Mark Vargas and John Anthony as well as Turning Point USA Founder Charlie Kirk, Cook County Commissioner Sean Morrison, Macon County Sheriff Jim Root, and numerous candidates for statewide office, including candidates and representatives of the Republican Gubernatorial Campaigns of Darren Bailey, Gary Rabine, Paul Schimpf, and Jesse Sullivan, Responsibility In Government conducted what is perhaps the biggest conservative event ever to happen in Downtown Chicago, at least in the last two decades.

At the same time, Responsibility in Government actively seeks principled candidates to run in the 2022 cycle as champions of conservative ideals and bold policies to challenge leftism’s tired and defeatist message. Important to this search was finding an exciting conservative candidate not only to retire Marie Newman, but to represent the hard-working men and women of Suburban Cook County with real leadership. Through the process of redistricting, the district Newman represents was sandwiched with the district of equally liberal Sean Casten, to form the new 6th Congressional District of Illinois, running from Beverly and Mount Greenwood in Chicago out to Oak Lawn, southwest to Orland Park, north to LaGrange, and west to Wheaton.

Stakeholder and supporter analysis of the new 6th District made obvious that I was the best candidate to win against these entrenched incumbents. My mother grew up in Beverly and her father and grandfather worked and lived in the district. My great-grandfather served for three decades as a Republican judge in Beverly, and my grandfather ran a family business on Vincennes Avenue, while raising my mother and her sisters, who went to school in Beverly. My father, a Latvian immigrant, escaped Soviet communism and chose to come to the 6th District to raise my siblings and me and to experience the American Dream. But I’ve become worried that the American Dream is at risk and is drifting away from our future generations.

That is why I left Responsibility in Government, to urgently pursue the Republican nomination of the 6th Congressional District, and carry forth a new message of hope and opportunity reflecting the diverse needs of our district and its residents. Together we will fight to protect our families against rampant crime. We will invest in education and employment opportunities, including abundant vocational and other training for those uninterested pursuing a bachelor’s degree to begin a career. Moreover, we will band together to support our seniors, honor our veterans, and clear a better path forward for every resident of our district.

Mr. Robbins has an impressive record of public service as a professional staff member in the U.S. House of Representatives where he worked for the Republican leadership of the Committee on House Administration; Committee on Small Business; Committee on Government Reform; and the Select Committee on Energy Independence & Global Warming in increasingly senior roles, culminating in the management of numerous aggressive public hearing and communications initiatives. Ray has an ability unlike anyone else to simply complex policy issues to effectively communicate with a diverse audience, and that is why Chairman Robbins is the best person to carry the Founding Vision of Responsibility In Government forward.

Chairman Robbins will begin his work with Responsibility in Government by building on the incredible foundation for election judge training that was cemented on November 20th. Already, plans are being made for downstate and suburban versions of the highly successful Election Judge Workshop, targeting more and more amazing men and women of law enforcement throughout Illinois.

Join me in congratulating Chairman Robbins on his new position, and please stand in support with me for the incredible work that the volunteers, investors, and stakeholders of Responsibility in Government do every day. 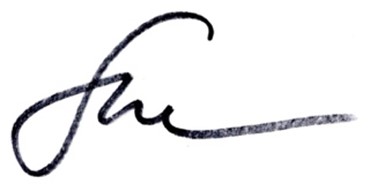